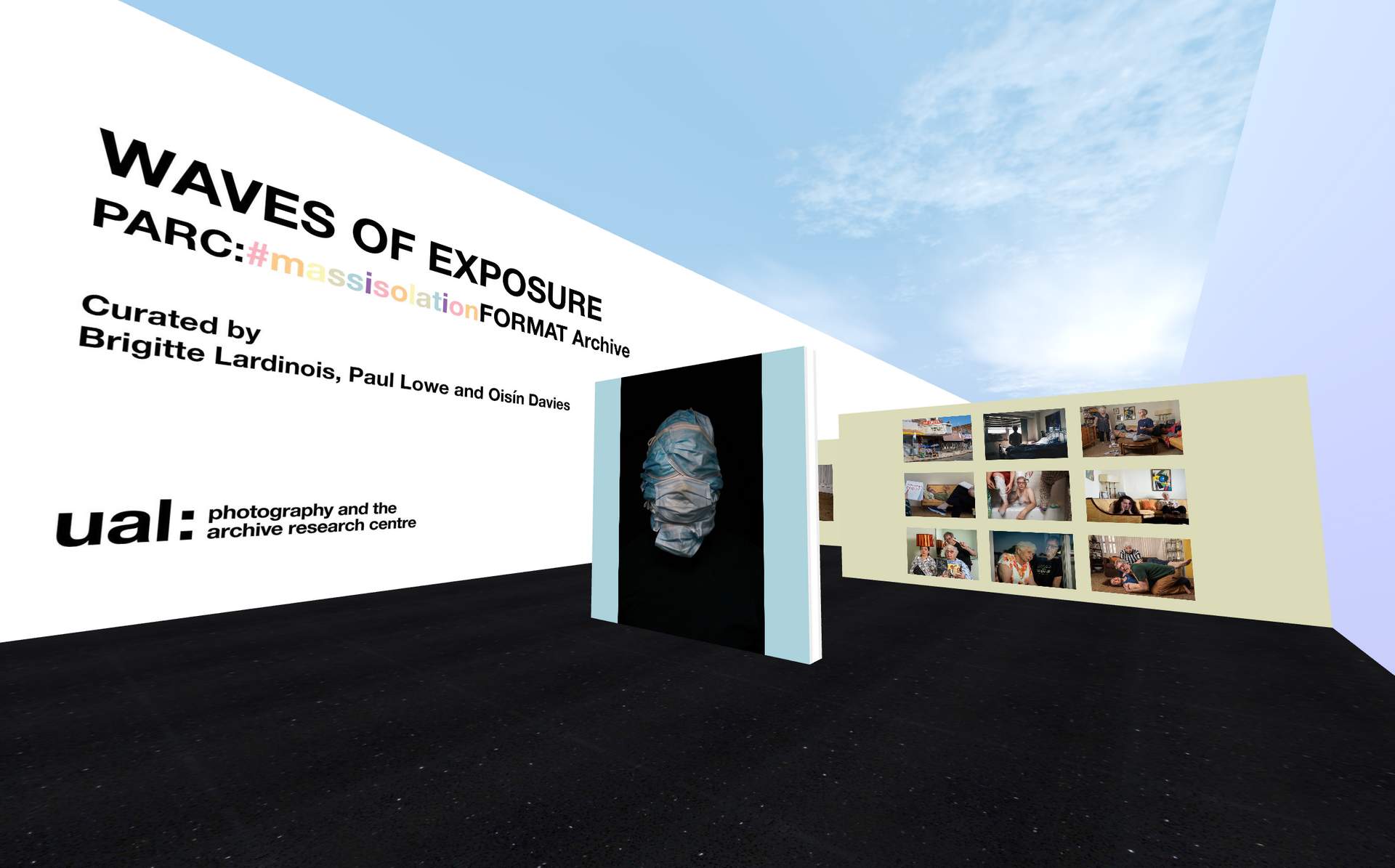 Just as it is all but impossible to recall major historic events like 9/11 or the Vietnam War without evoking photographs, the Covid-19 pandemic is producing images that will shape the memories of future generations, as well as being part of the ongoing process of under-standing and adjustment to its catastrophic impact.

3233The pandemic has produced a unique moment in the history of photography, never before has one theme been explored simultaneously by so many different image makers, from photojournalists to portraitists, artists to activists, documentarians to doctors. The power of photography in this emergency lies in its apparent capacity to capture and respond to collective trauma, and it is being used during this crisis in myriad ways to make sense of a previously unimaginable new world order. The pandemic is a global media event like no other, in the sense that it is not only being witnessed by audiences around the world simultaneously, but experienced in their own lives too. Equally, the effect on media professionals is highly unusual: usually reporting on the lives of others, their cameras now turn on their own lived emotional experiences of the pandemic.

The pandemic has further underscored social media’s centrality in modern life. Under lockdown, it has become for many people the primary means of connection, resulting in an explosion of creativity, self-expression and peer support within a primarily visual form. Arguably, the pandemic has seen Jurgenson’s concept of ‘the social photo’ take on a radical new dimension, as visual images have become a currency through which we can express our psychological, emotional and experiential states of mind in real time to each other. The extraordinary outpouring of images in response the MassIsolation-Format open call demonstrates this social nature of the image, as new networks of connections have been made in real time as image makers reach out via Instagram to the world, and the world has replied and interacted directly.

'Self-portrait Wearing 64 Masks' From the series 'Masked: A Portrait of Amazon' "A selfportrait, wearing every mask saved from each night shift I wore whilst working at Amazon during #lockdown. Part of an ongoing project reflecting on my experience of Lockdown and the COVID pandemic." https://tinyurl.com/TristanPoyser 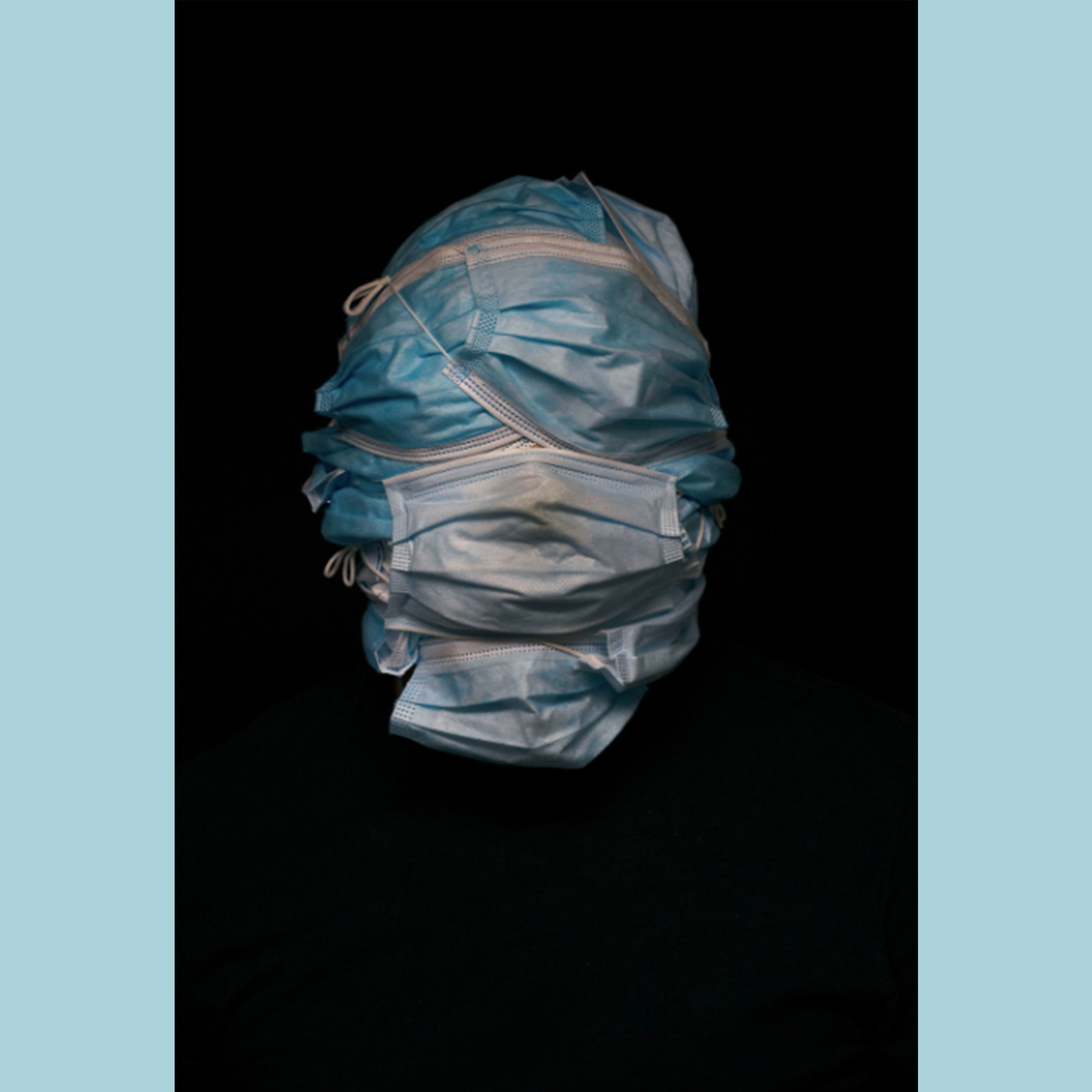 from the series 'Masked: A Portrait of Amazon' A selection of the 136 portraits of Amazon Associates photographed during the COVID 19 Pandemic. "The typology of 130 portraits comprises of associates from over 25 different nationalities. Participants had worked at Amazon from as little as 2 days, to as much as four years. Each participant was asked to write down two ways they had been affected personally by COVID 19 and Lockdown. This ranged from missing the gym, to close family members dying from COVID-19. The opportunity to document participants' thoughts and feelings gives control of the narrative to the individual participants offering a different agenda to that of the media and politicians, creating a record of people in their own words." 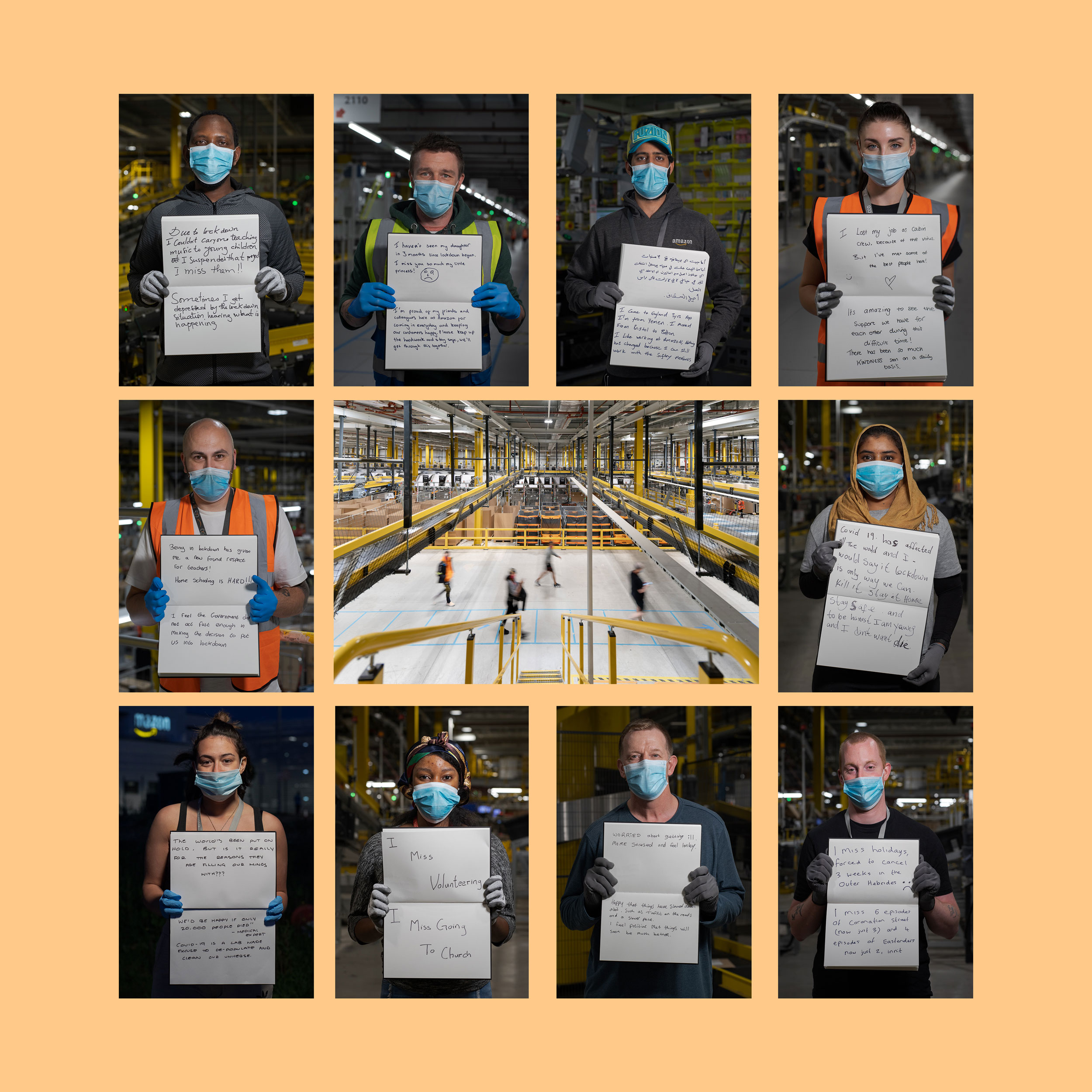 'Quarantine in Queens' Photographer Neil Kramer's poignant and performative scenes see the camera turned on himself, his mother and ex-wife as they navigate lockdown in a Queens, New York apartment. 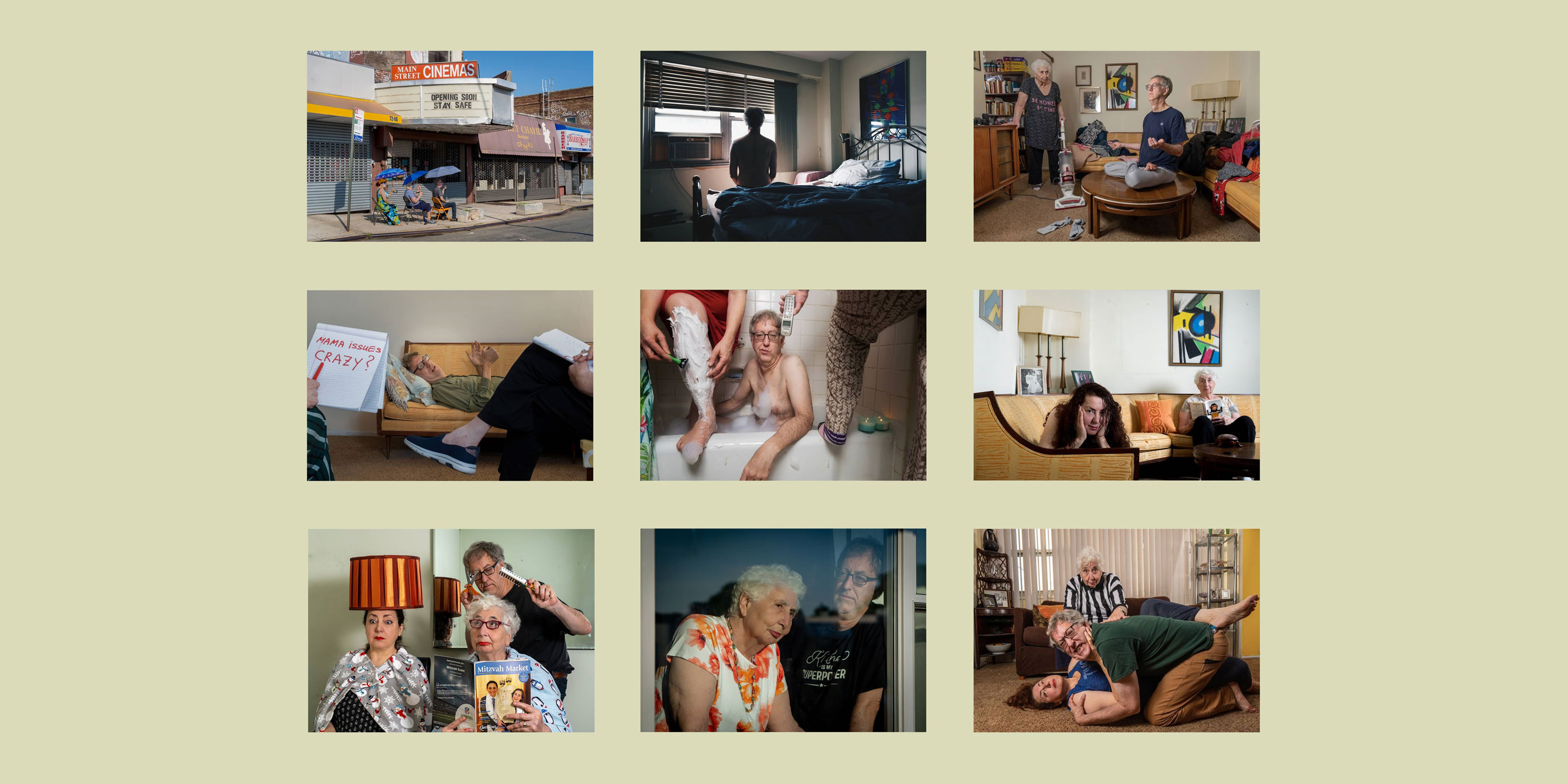 Clare Ellen Shanahan 'Confined Self Portrait no.1' "As we step out of this period of lockdown, wonder what’s around the corner in this new reality." Zula Rabikowska "In response to these bizarre times, where nobody really knows hows to feel, I started working on a sequence of new images images in my flat in London where I probe the boundaries between fiction and reality. I don't know what's fact, hope or just a living nightmare.⁠ ⁠ I place myself in various parts of the flat to visually bear the feeling of physical as well as emotional isolation, loneliness and longing for the outside world." ⁠ 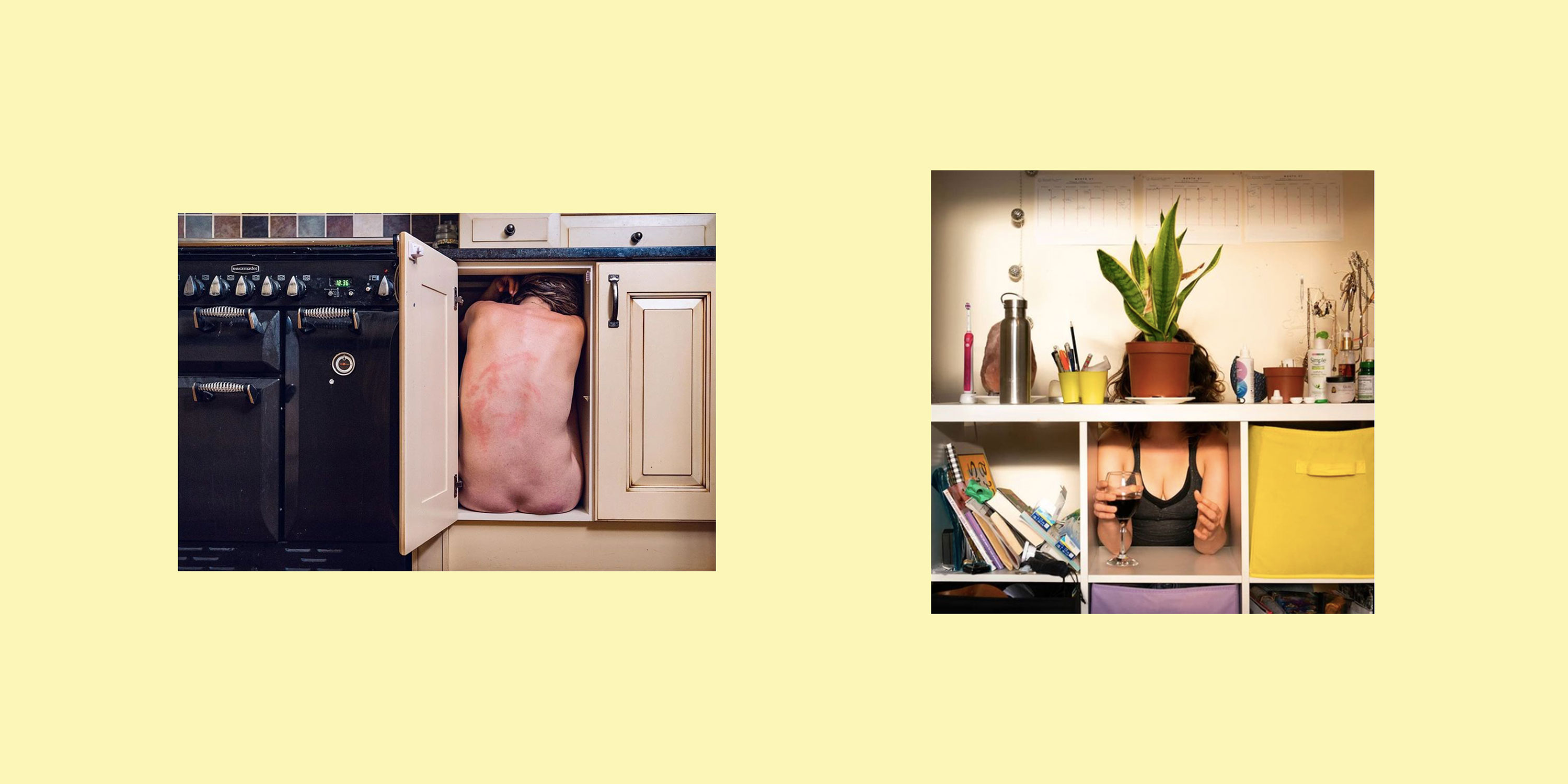 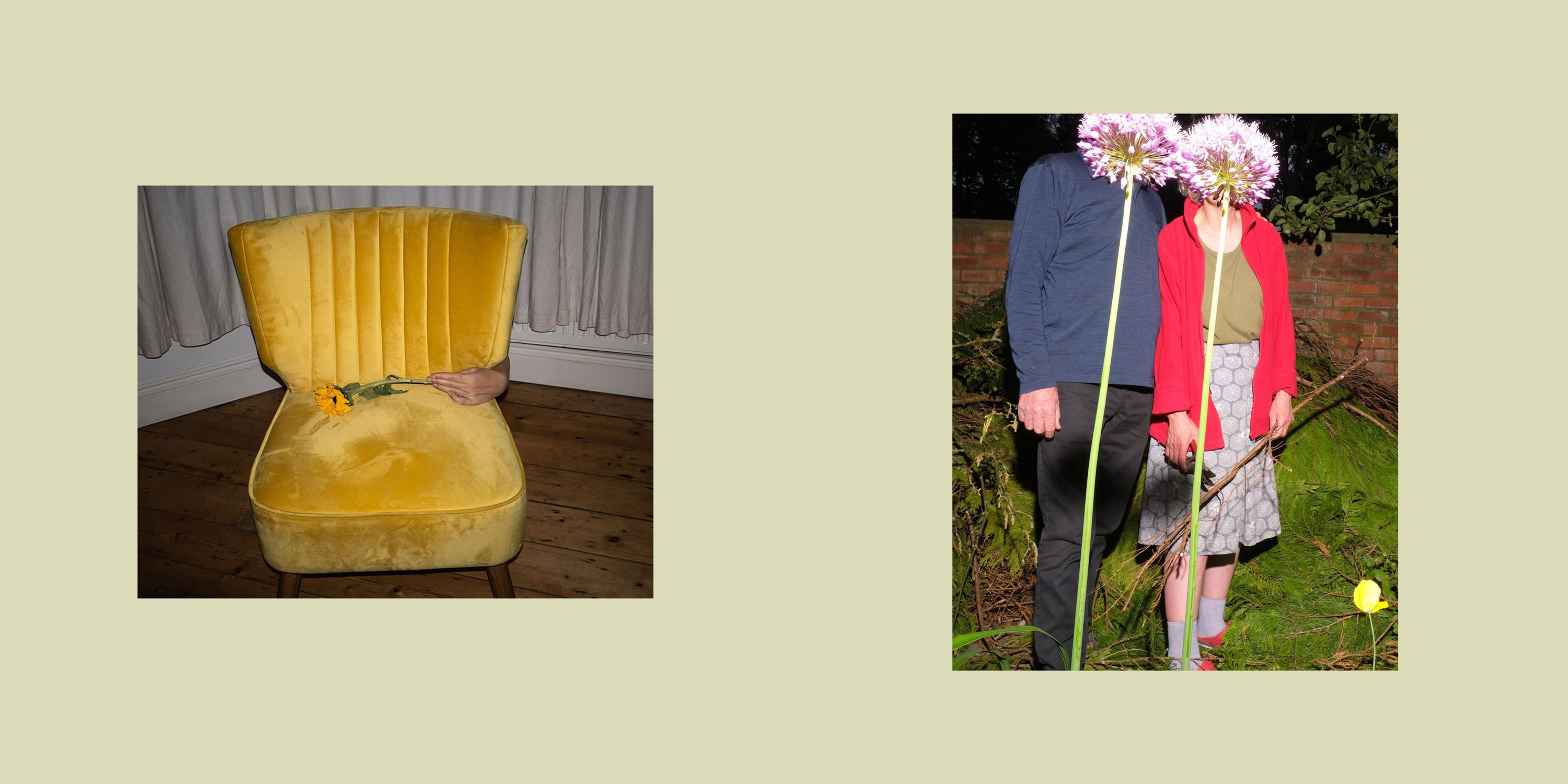 From the series 'As close as we can be' Chiara Bellamoli captured portraits of her friends via Webcam during Covid-19 lockdowns, asking each sitter to reflect on the their feelings and experience of lockdown. The photographs touch from a distance, showing scenes of intimacy or solitary contemplation during a time which for many was characterised by isolation and constraint. 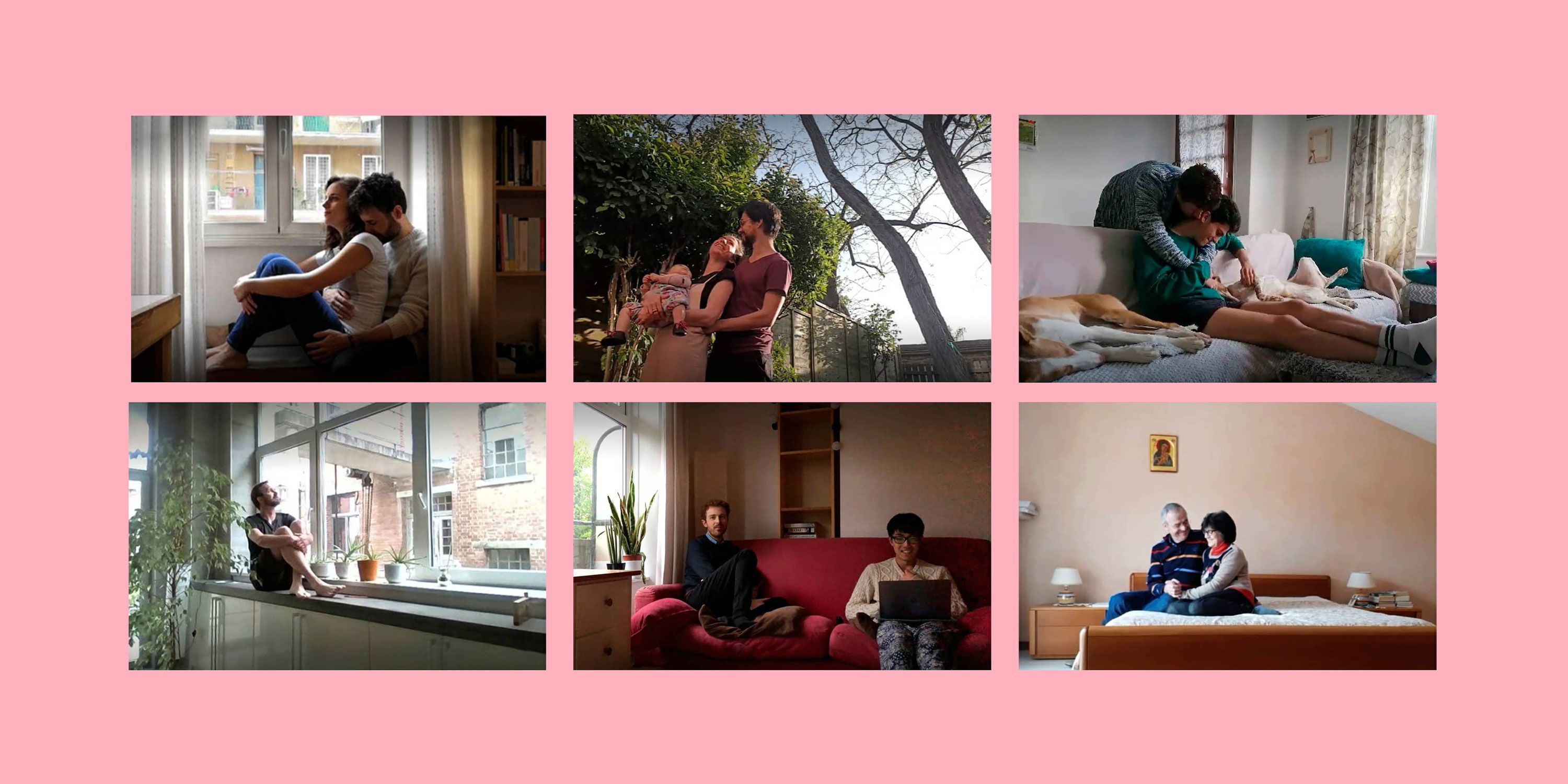 "Physical distancing" On walks and runs around around Leeds, Lizzie Coombes documents neighbours and passersby from a safe social distance. 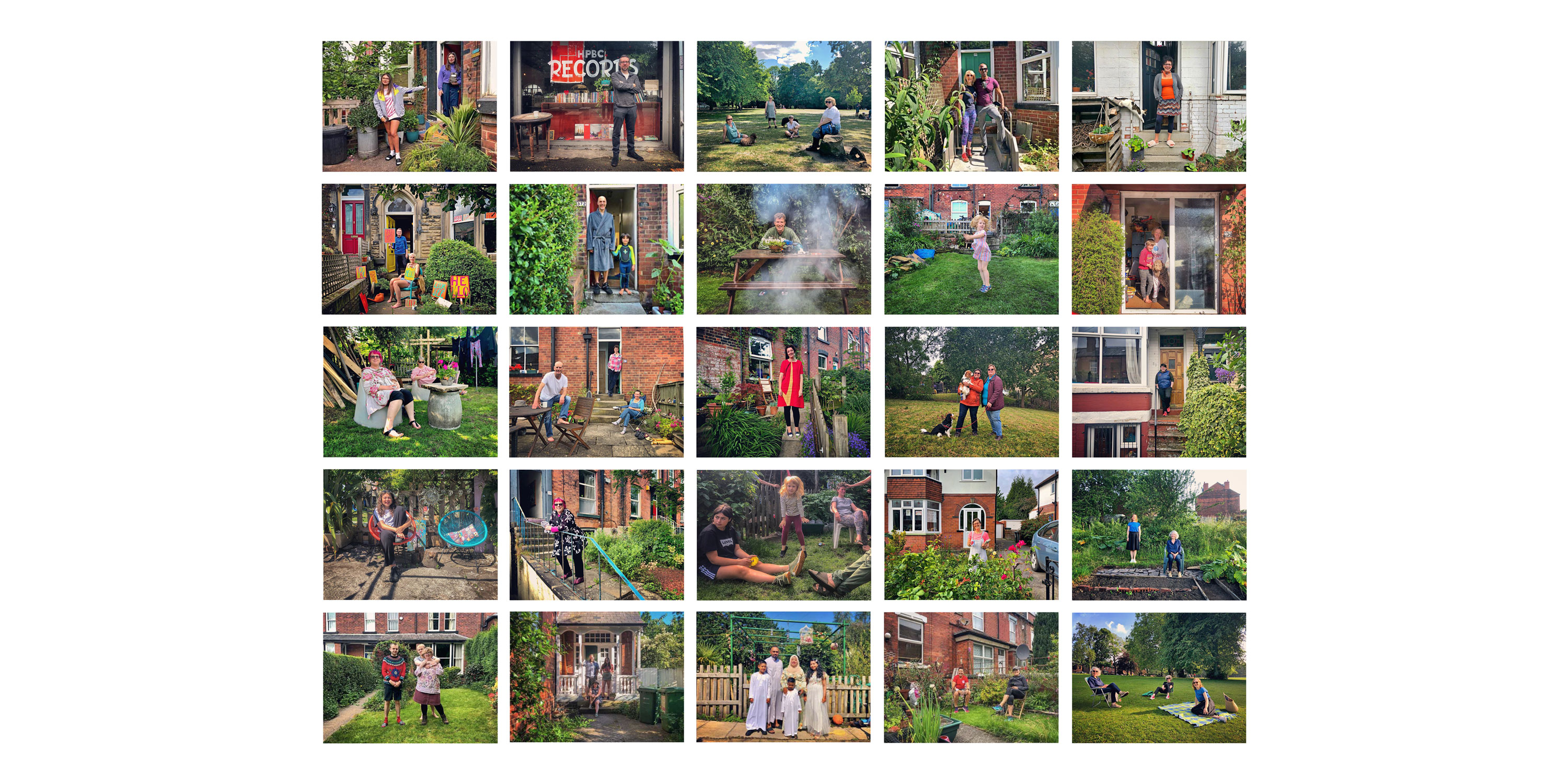 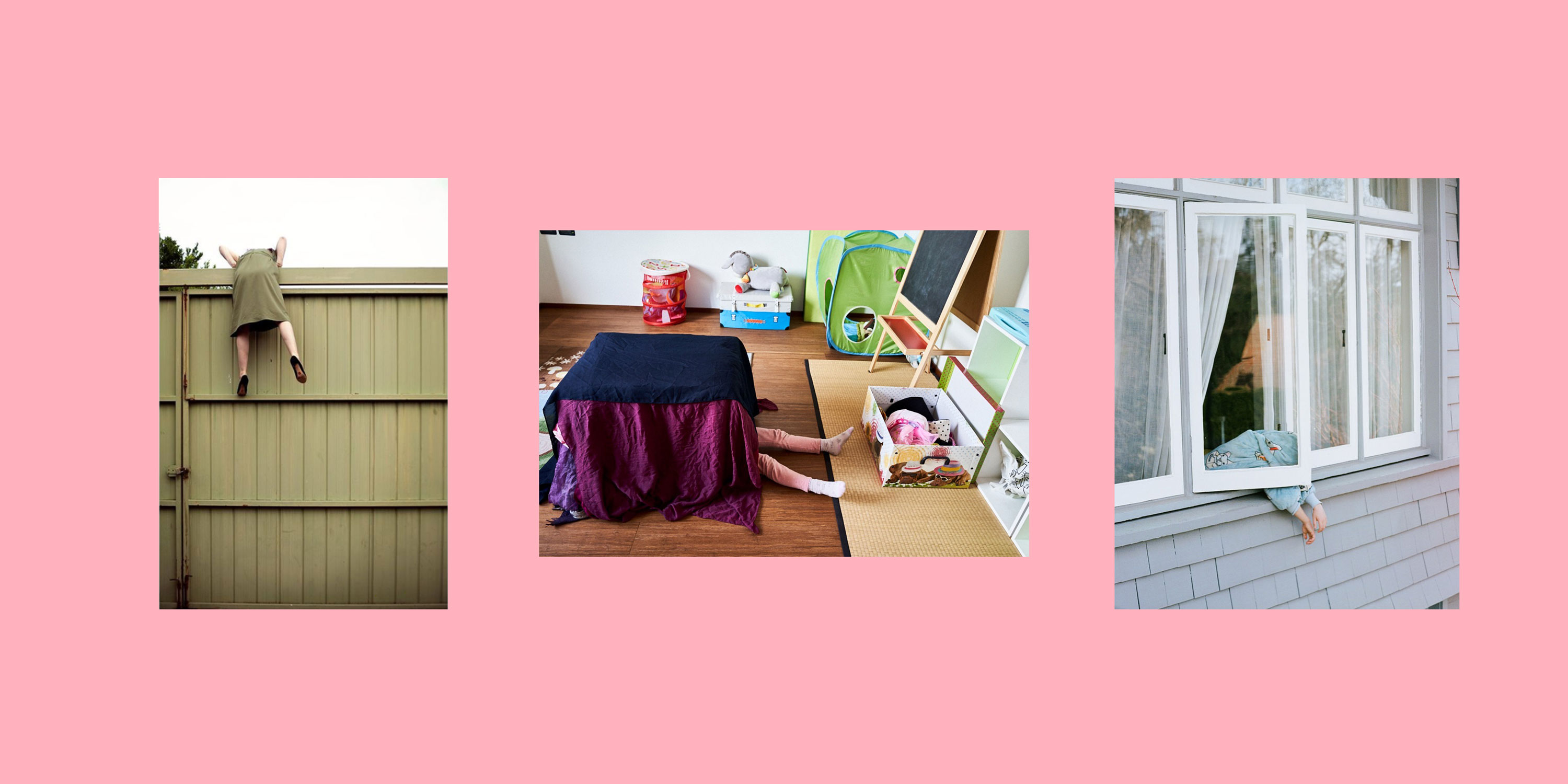 Daisy Noyes 'looking through, self-portrait in isolation with marlow' #parcmassisolationformatdaisynoyesphoto https://tinyurl.com/daisynoyesphoto Caspar Claasen "We surprised my mom today, with a few hugs in plastic sheets" #parcmassisolationformatcasparclaasen https://tinyurl.com/casparclaasen Nicole Reed 'No droplets will reach me, no droplets!' 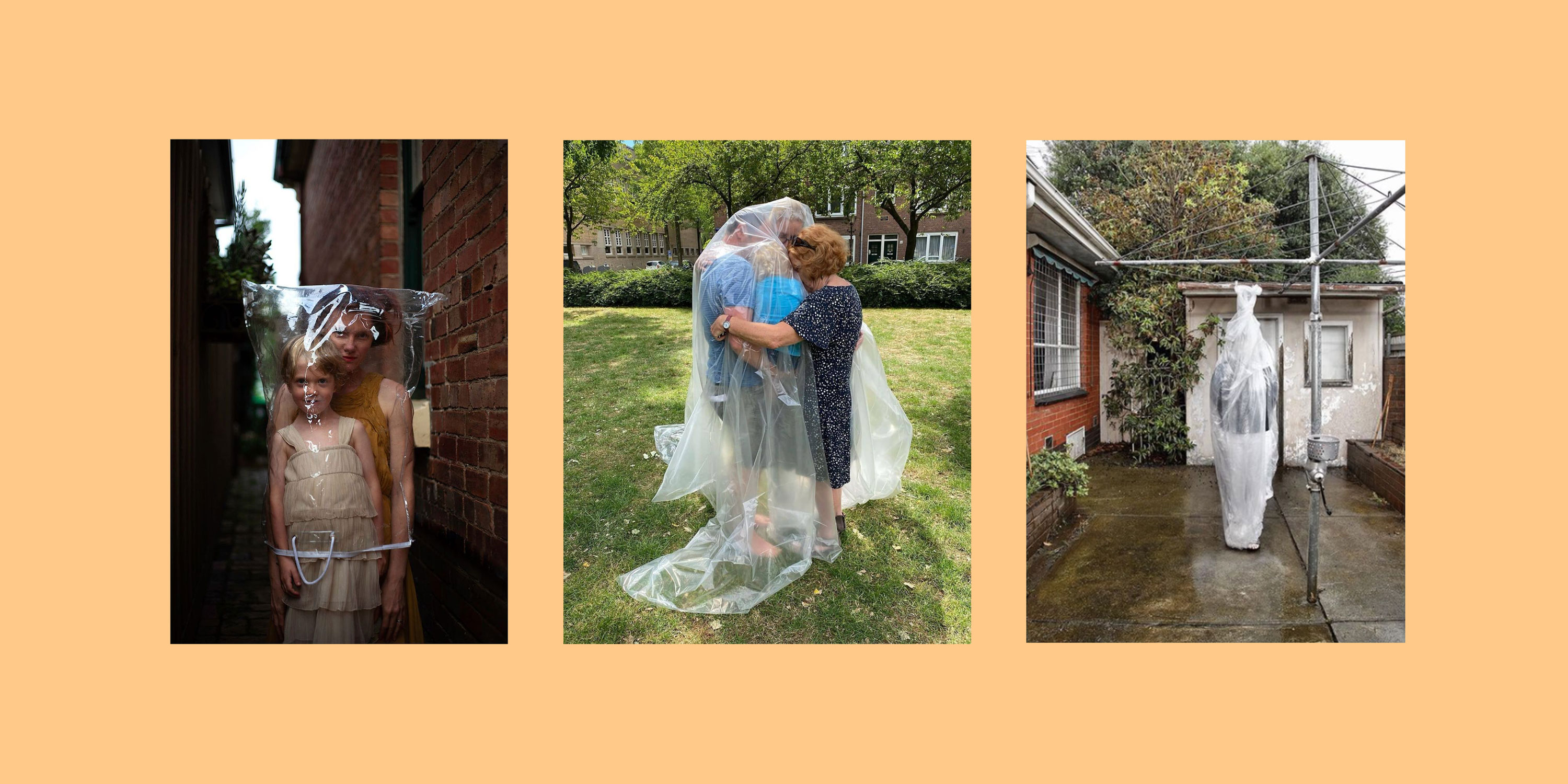 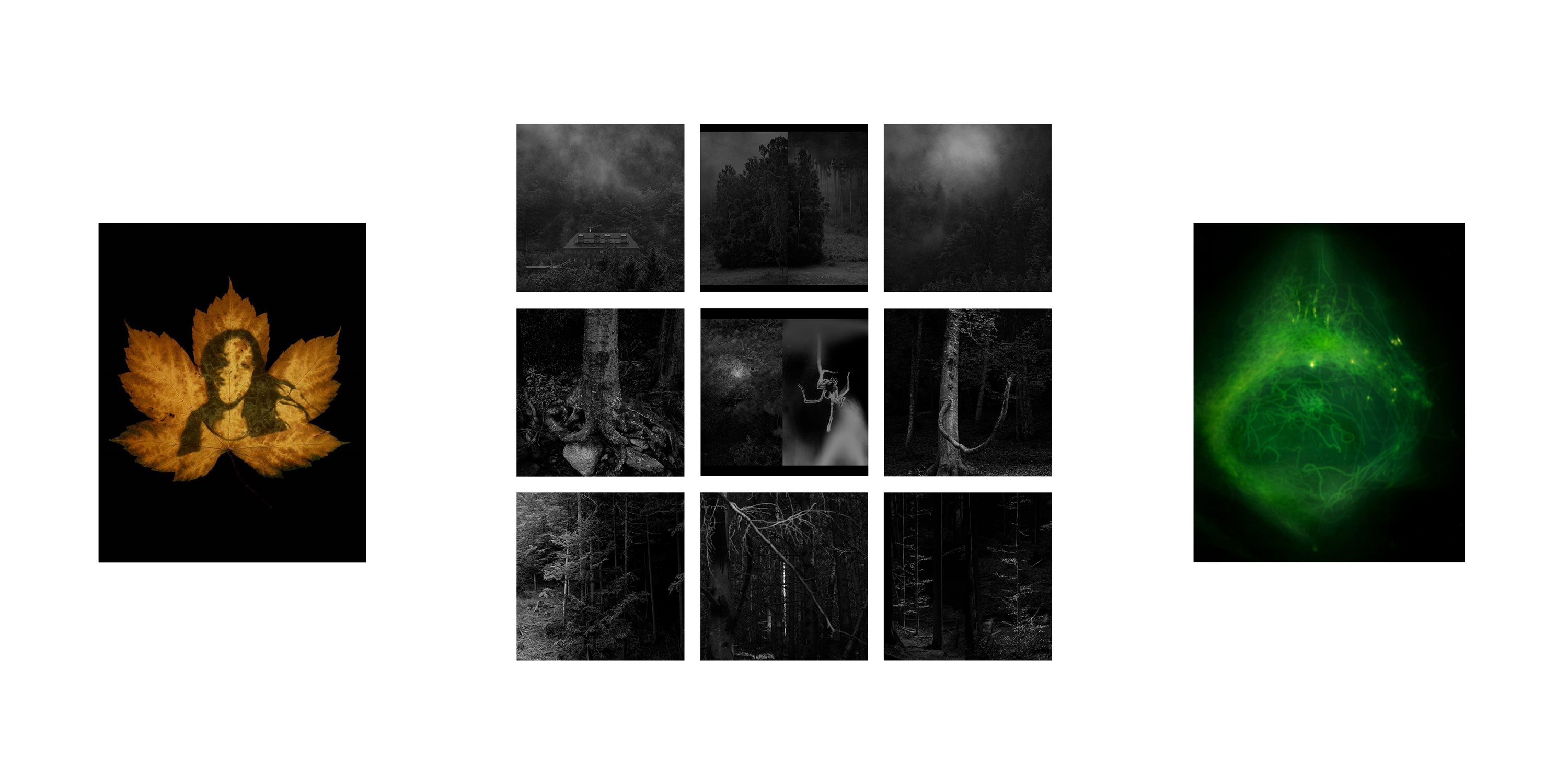 Omotayo Tajudeen 'Pandemic portraits — Empty highways' "Lagos - “The city that never sleeps; even at night”, continues to snore in silence in broad daylight because of the #covid19 pandemic as its citizens eargerly wait for the 4th of May, 2020 as though it is the day of rapture. Who would have thought this could ever happen. Who knows where these places are in Lagos? Lagos, Nigeria May, 2020" Joanna Vestey 'Custodians for Covid' "Each image in the series features an iconic theatre space and spotlights the “Custodian” who was charged with its care during the first UK lockdown. The Custodian’s presence brings the setting to life and celebrates the often-unknown role of the guardians who continue to maintain these institutions. The series explores themes such as heritage, stewardship, identity and preservation, which feels even more poignant given the isolation so many are currently experiencing and the uncertainties so many face." 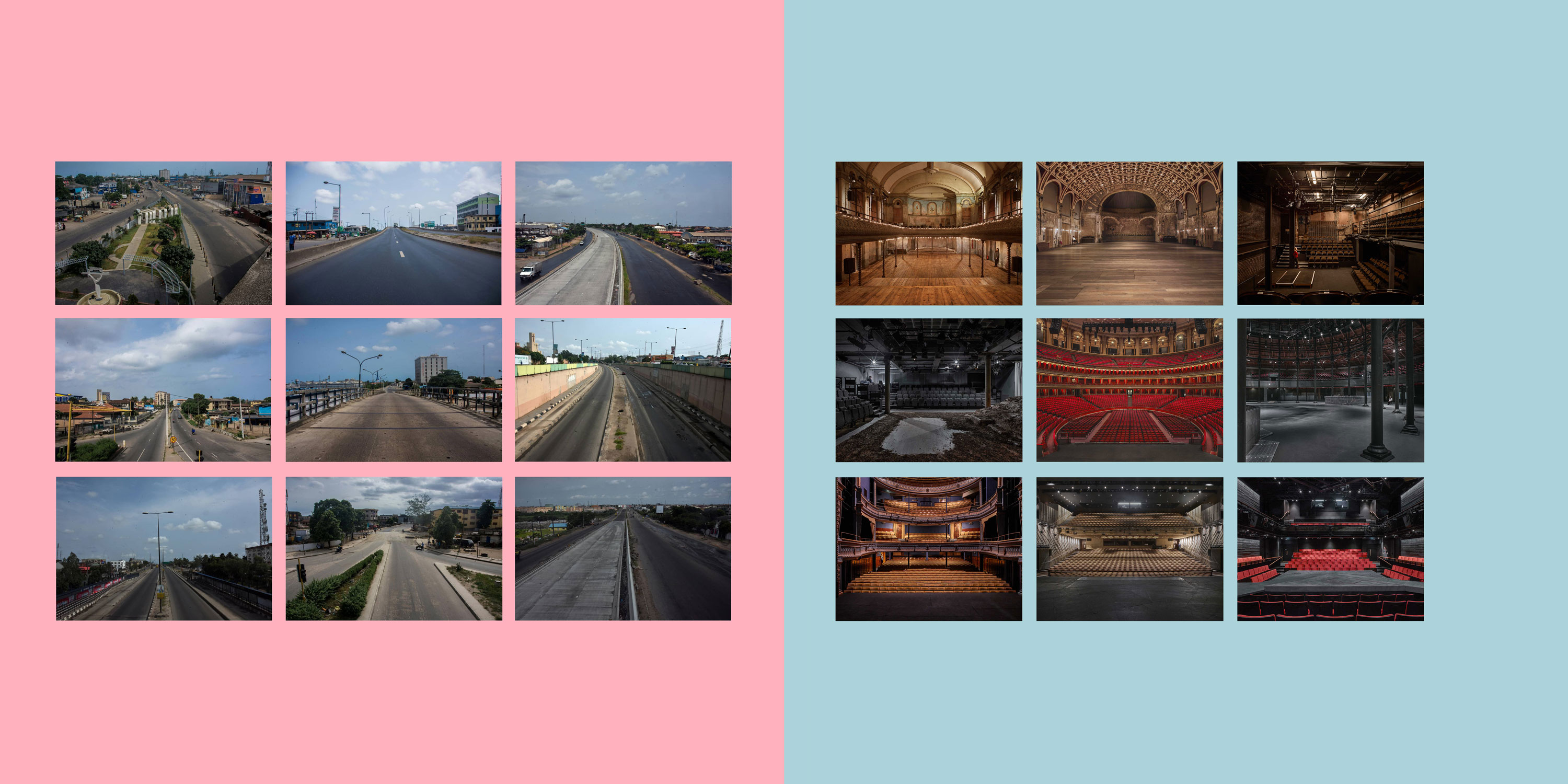 Kimberly Witham "I think this series should be called “The Gleaner” as all of the elements are gleaned from my surroundings." #parcmassisolationformatkimberlywitham https://tinyurl.com/kimberlywitham John Darwell "Since the beginning of the lock-down I've been photographing the stuff we throw in the compost, or rather the small tray you buy mushrooms in that we use, prior to transferring from kitchen to bin. I've now photographed hundreds of these random, compositions and would be interested in what people think, so any thoughts gratefully received. Would you like to see more ..hah you can even get an insight into our dietary foibles as the weeks of isolation go by." #parcmassisolationformatjohndarwell8 https://tinyurl.com/johndarwell 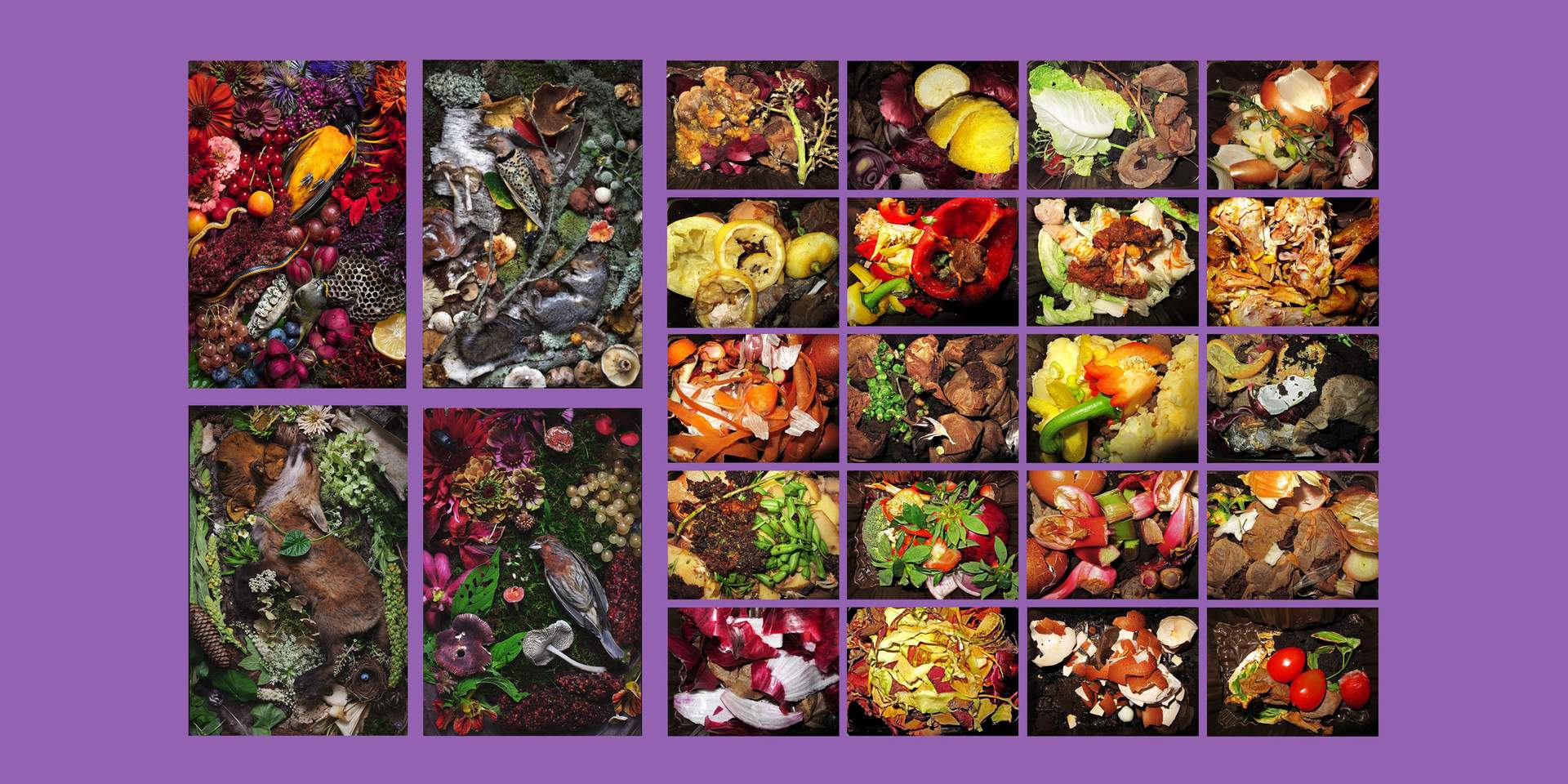 Snapshots of family life under lockdown, in Montevideo, Uruguay.

A selection from 'A Series of Portraits of People Self Isolating at Home. "Each has given their own personal reflections on the times we are living through. Photographed with zero physical contact through closed windows (with permission!) and communicated via phone." 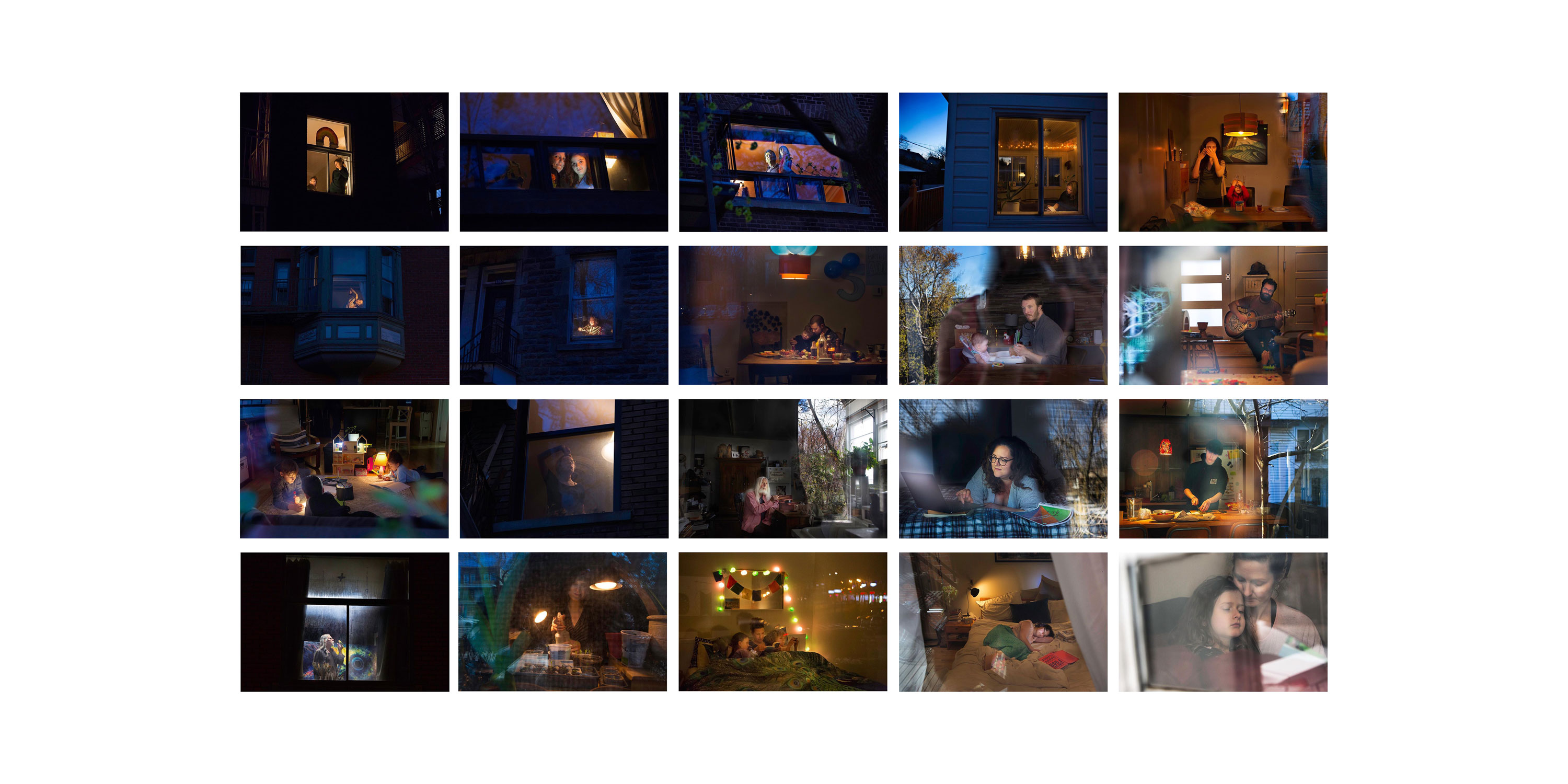 'Road Warriors of Covid 19.' "While many of us have been safely quarantined at home, there has been a surge in the large number of people who have selflessly traveled long distances to ensure that we are supplied and fed." 'Reserving a spot at the ration shop.' "I stumbled across these social distancing circles at the ration shop close to my house, a while ago. The government of Telangana is giving out 12 kilos of rice per person and Rs.1,500 per household for all holders of the white ration card." 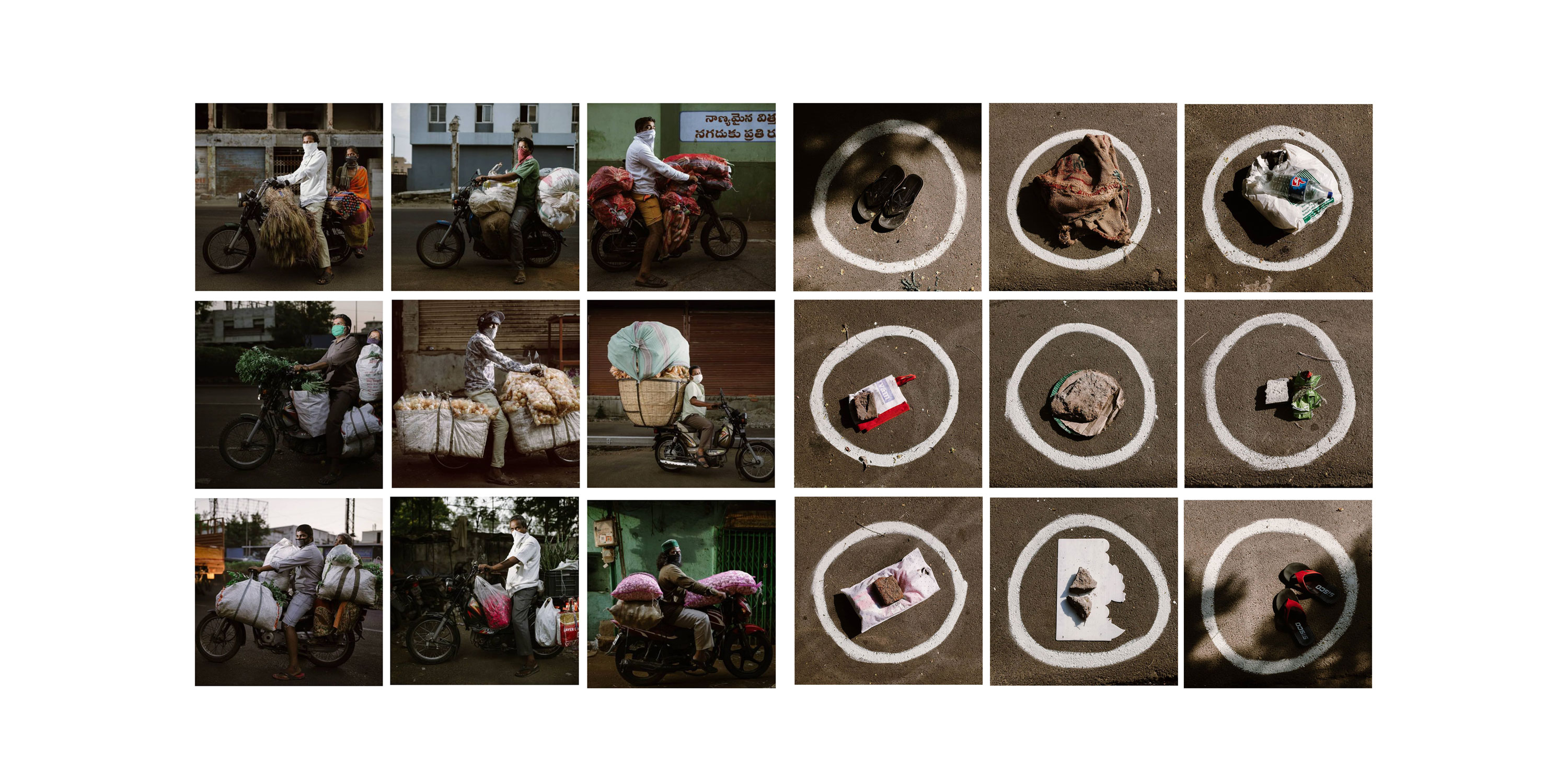 'Lockdown Barricades' With certain parts of the city marked as 'Containment Zones', these areas have been shut off for all movement. Barricades have been erected at the entry and exit point of each lane, some by the government and some by the residents themselves. The variety in the materials used to make these is fascinating. Many are visibly durable ones, constructed with metal frames, but there are also an equal number of makeshift barricades that have been put together with materials available nearby. 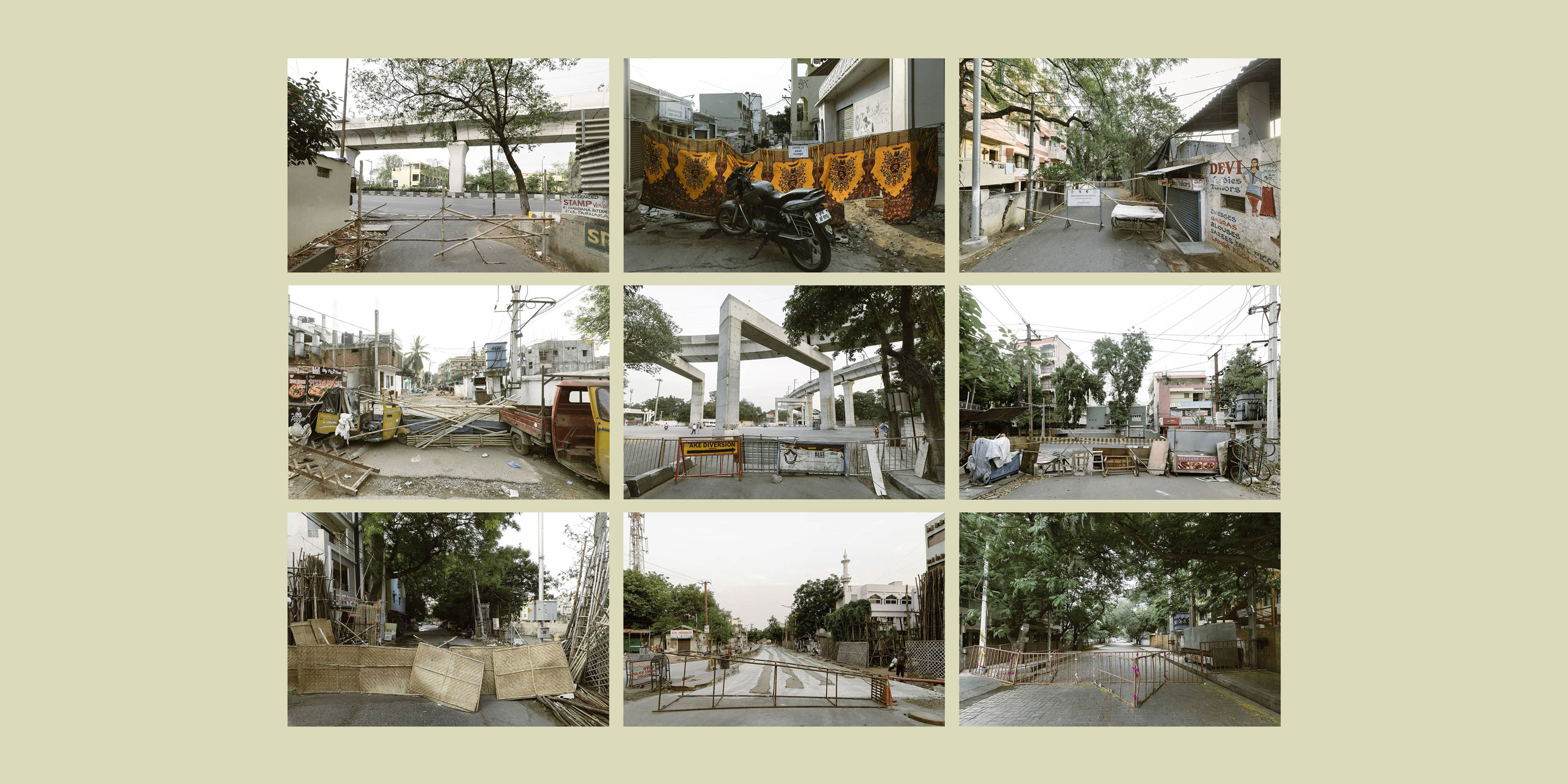 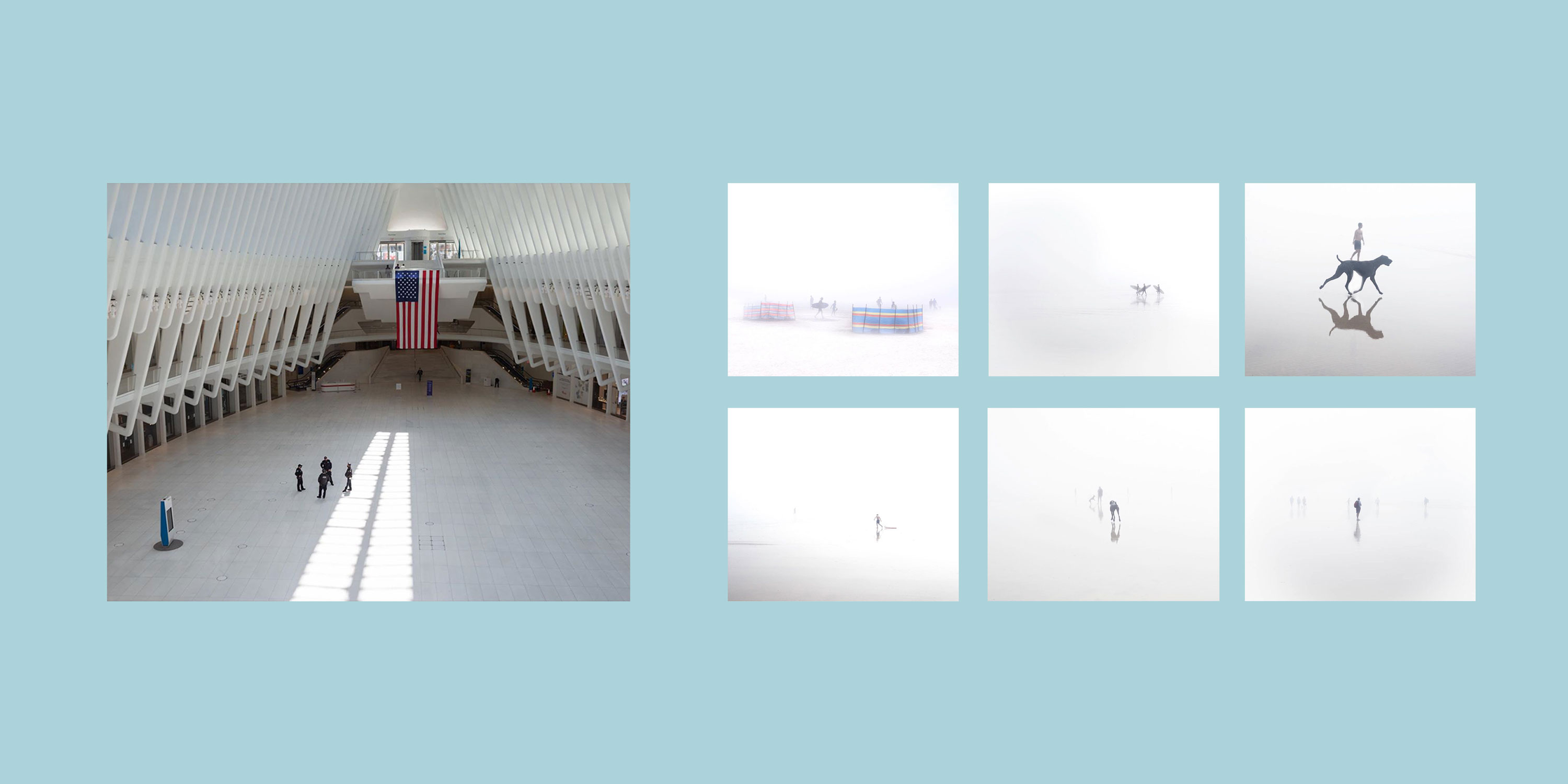 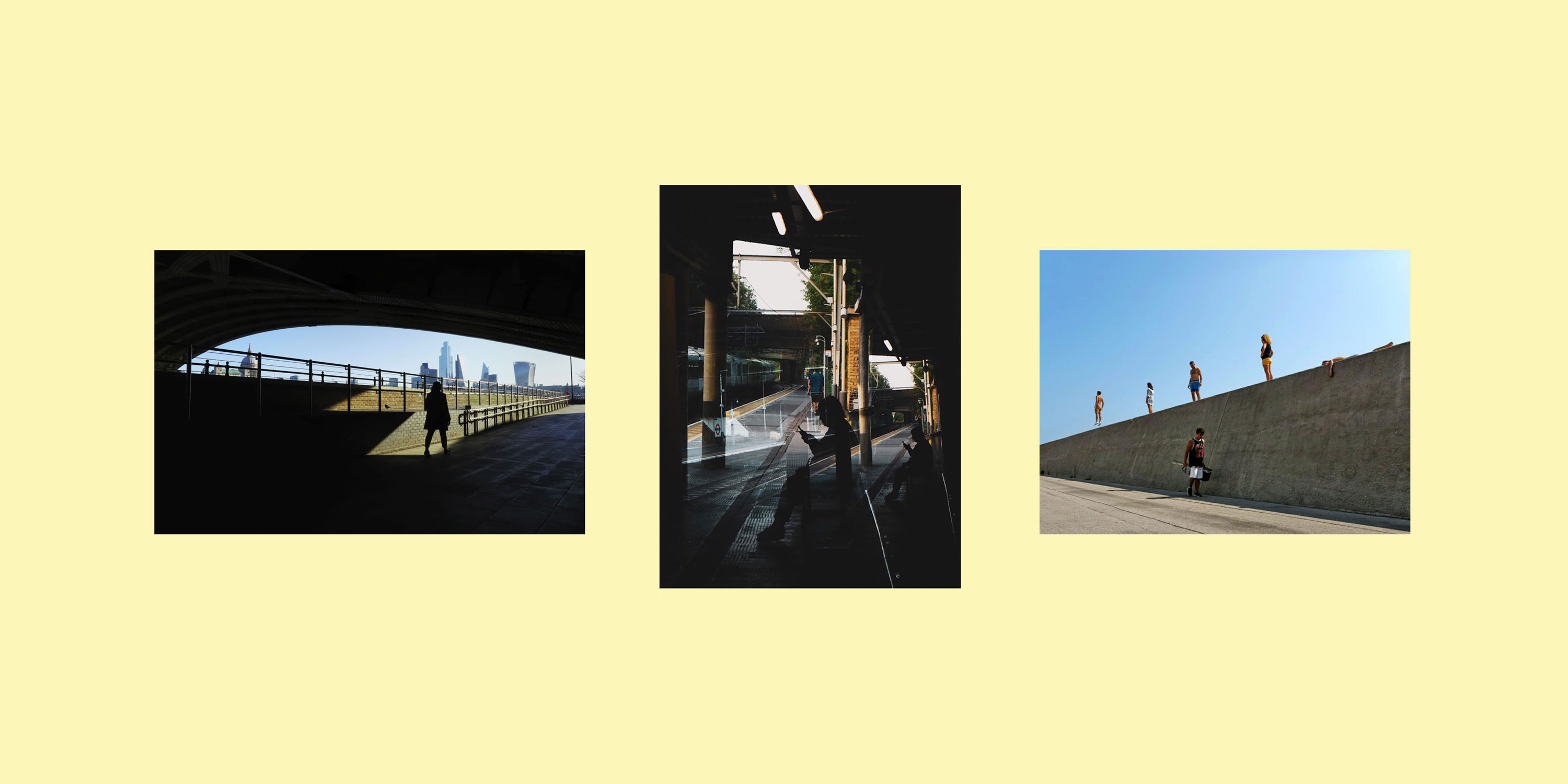 From the series 'obs-cu-ra' "Series produced during the covid-19 that seeks to represent the frontier and the abyss between the outside and the inside world. Freedom and confinement through this limited frame of the real - the window - and its representation of a changing life. In order to obtain the images, the photographers transformed their houses into obscure large-format cameras, creating a dark and enigmatic atmosphere, just like the indecipherable future that no one knows for sure. Each with its uniqueness. Achievements and losses. Wishes and privileges. Fears and hopes." 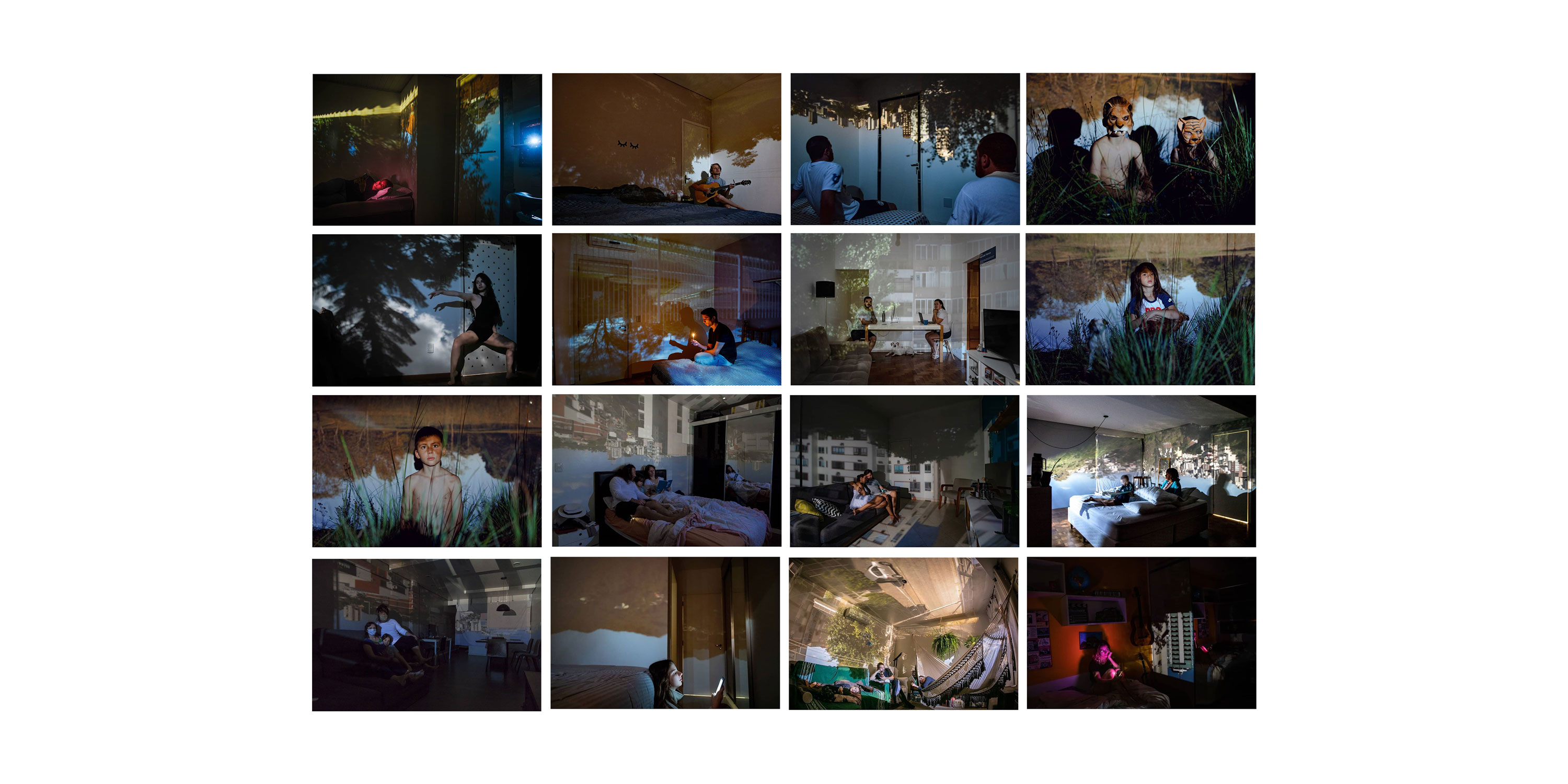 From the series 'The State of Being Alienated' Burney van Leenen's portraits capture the uncanniness of lockdown. Confined to their homes, van Leenen's subjects take on the quality of actors on film sets, bathed in the eerie bluish light of dusk. 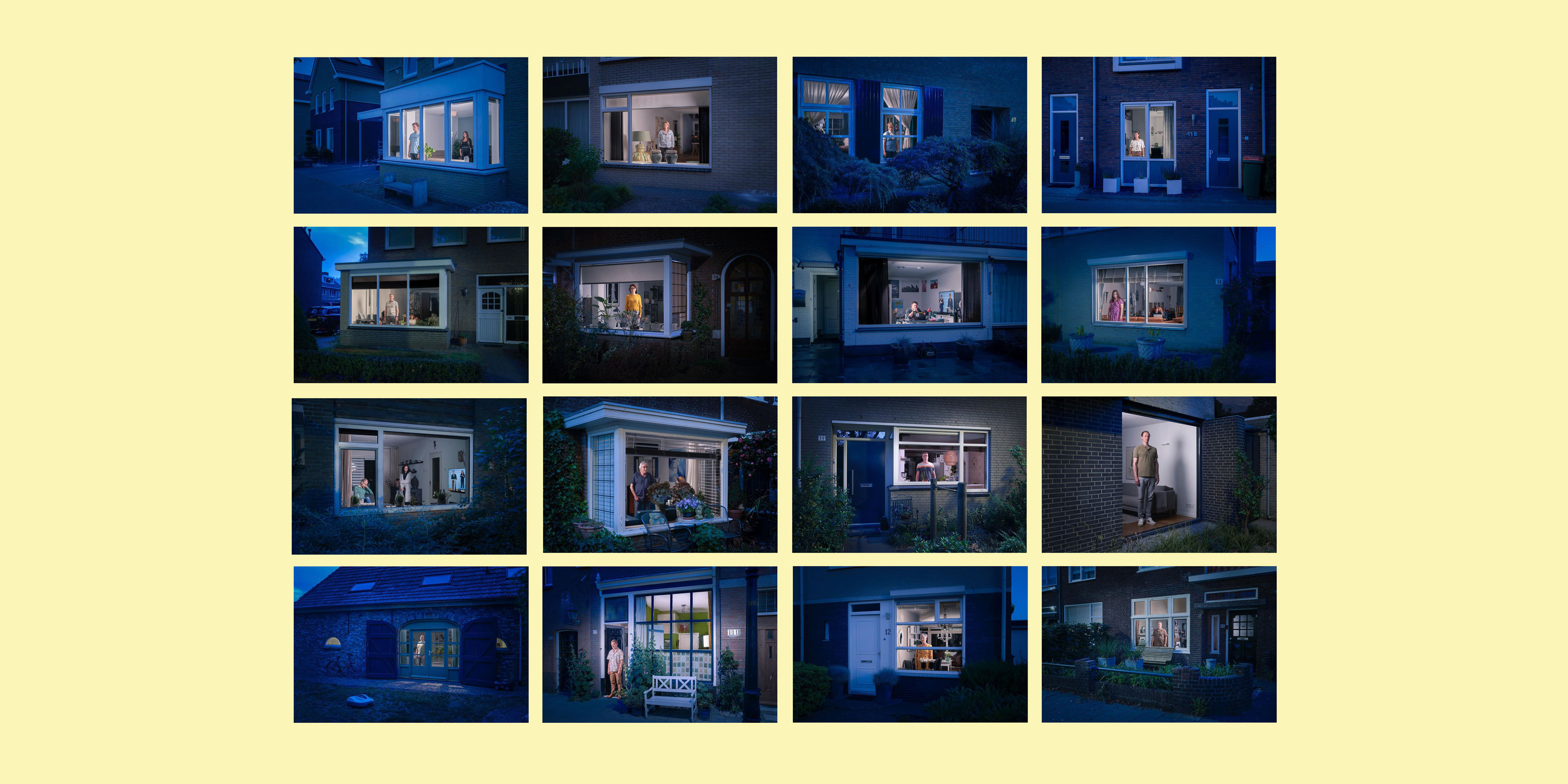 "The PPE-19 project delves into the past and the present of PPE masks, from the bubonic plague costumes to the modern-day hazmat masks. This work was produced in lockdown and were all created in my apartment." "Humans have been wearing masks for a millennium, they are truly ingrained in our primal psyche and are deeply rooted in folklore. Masks rituals occur throughout the world and seem to share numerous characteristics." "During the bubonic plague epidemic that swept through Europe. Plague doctors who treated the infected wore Personal Protective Equipment to protect them from infections. This menacing suit typically consisted of animal-like masks and was filled with dried scented flowers." 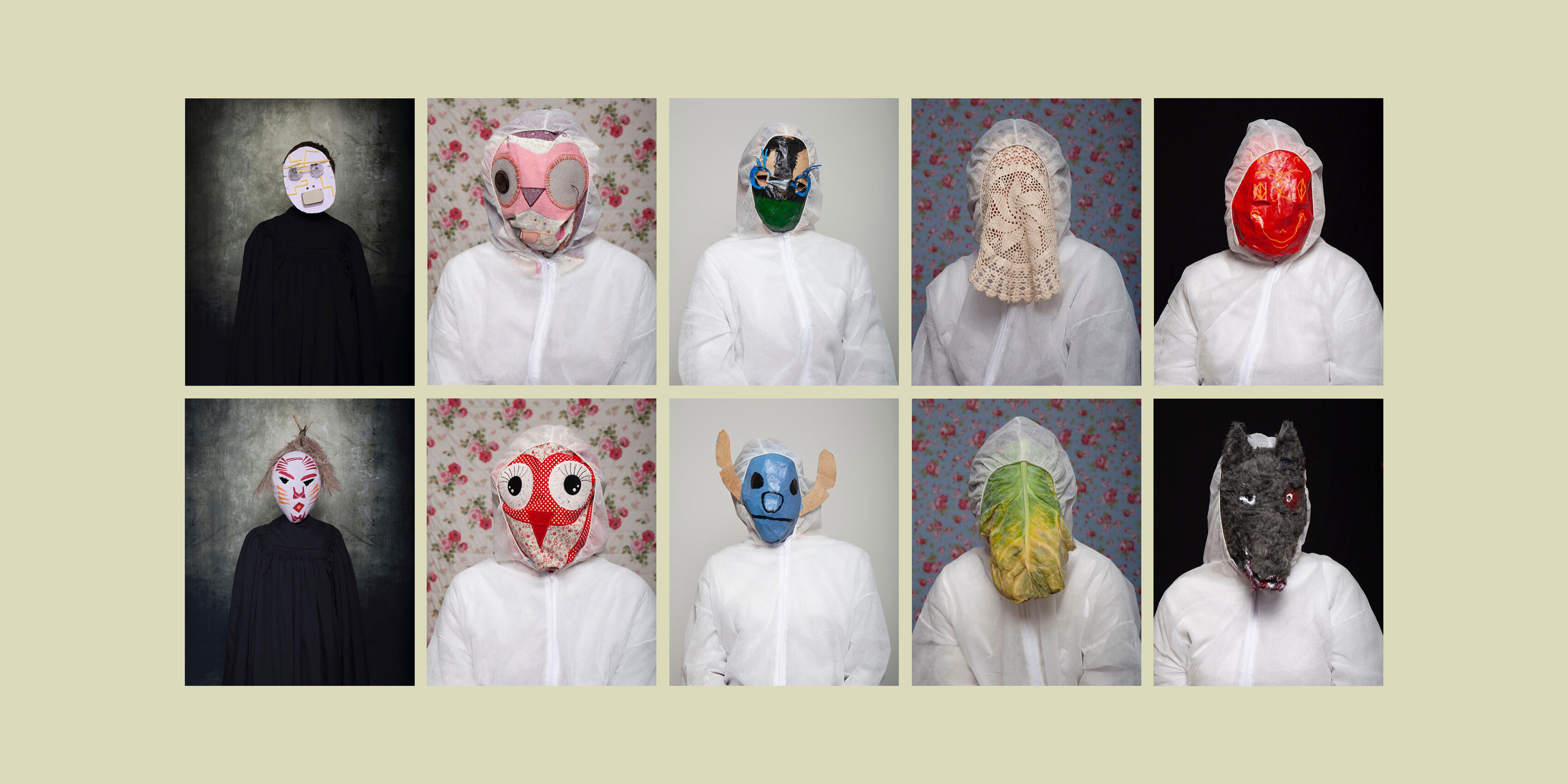 Dr. Brian Li poses for a photo at Toronto's Sunnybrook Hospital wearing a modified snorkel mask developed using 3D printing technology. The reusable mask which aims to protect physicians from Covid-19 (and other viruses) will soon be trialled as an alternative to the N-95 mask which are currently in very short supply. Dr. Li is leading a team of engineers and physicians to help develop this new mask. The group has very promising preliminary tests for safety and they hope to be rolling out it's clinical use soon at the hospital. Portraits of a Pandemic by www.johnhryniuk.com

From the series 'Behind the Windows' "Moments in lockdown. Portraits behind windows of beautiful friends @half_pricey @jimmijam_patto @dj_dotify"

Rolls and Tubes recreate the great photographic and artistic works of the modern period using that most essential of materials, toilet paper.

From the series '7 Ways to Forget Someone You Love' Scratching, burning, dripping and punching holes. Maria Theresa Moerman Ib turns found photographs into meditations on loss, trauma and memory.