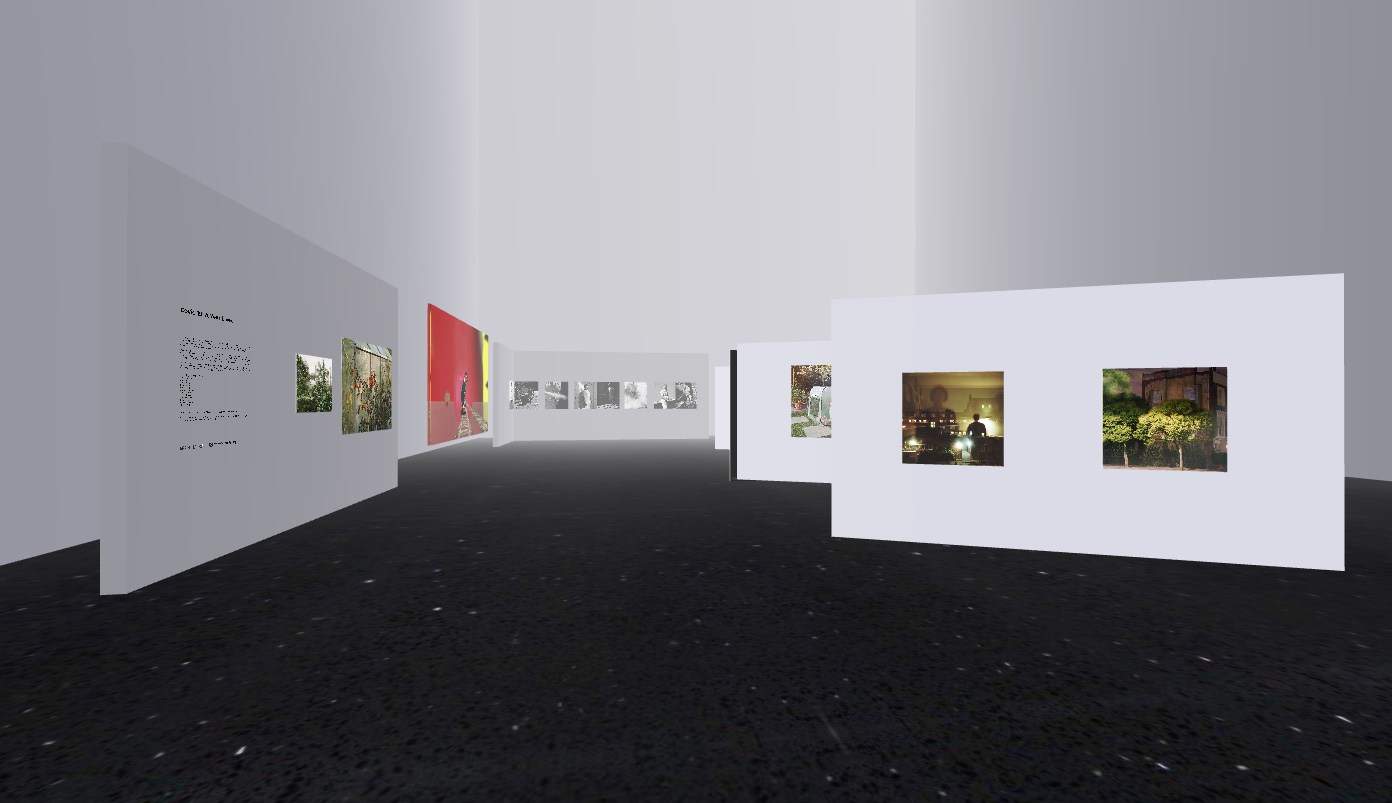 Artz’s commissioned work features sculptural forms made from her photographs, created as moving image works.The artist travelled on public transport throughout the pandemic to make photographs and interview people capturing their emotions and vulnerabilities.

Ayra wakes to another day of shielding. It’s hot even though it’s still early. She gets up to pour herself a glass of water and the morning sunlight gleams on the dirty glass. She talks to herself as she puts in her contact lenses. She’s not sure why she doesn’t just wear her glasses when there’s no one there to see her. Here we go again, she says. Her reflection stares back at her, its shadowed contours made unfamiliar by the harsh shaving light above the mirror. There are no windows in the bathroom, so she’s turned it into a makeshift darkroom, swapping out the old yellow lightbulb for a red one. There’s a roll of masking tape on top of the toilet cistern for sealing the door later. She takes one small white pill from the packet under the sink. The foil is labelled with the days of the week, an edible diary.

I Am Reaching Out To You

For this writing commission Anneka French has used the phrase ‘I am reaching out to you’ as its title and starting point . The text is a blend of critical reflection, and creative fictional and autobiographical writing. The critical element of her text analyses photographic works by Carrie Mae Weems and Elinor Carucci and reflects on a selection of intimate and domestic from Weems’ ‘Family Pictures and Stories’ (1981-2) and ‘The Kitchen Table Series’ (1990), alongside Carucci’s ‘Closer’ (1990s-2000s) series. The research and text resonates during the Covid crisis as it is a multi layered meditation on the pandemic period as the writer has experienced it, from an acknowledged place of personal privilege, from home and through photographs. The text is interwoven with memories, new poems and diary- like entries and is a commentary on isolation, intimacy, parenthood, domesticity and family.

Kent’s work looks at the experience of Covid and the onset of ‘lockdown’ coincided with the start of spring. Throughout the pandemic we witness the annual seasonal cycle and become aware of the essential need for access to nature.

Hoare photographed the undervalued workforce that helped keep our society going, choosing to photograph street cleaners who kept our environments, cities and streets clean during the pandemic.

Neophytou made work with the Greek Cypriot community in north Birmingham focusing on how the challenges of Covid-19 affected this community as people adapted to the challenges of practicing their faiths and at the distance felt between the UK and family and heritage in Cyprus.

Yong’s work was made in lockdown in London as she photographed the view from her bedroom window, witnessing how the same public space was being used and shared throughout 2020. Social distancing, face covering, exercise, team sports and family events feature in a typology of 76 black and white photographs exhibited as a performative work.

Take Ur Foot Off My Neck

On 25th May 2020 a forty-six year-old man by the name of George Floyd was murdered by a police officer in Minneapolis. The graphic video showing the moment Floyd’s life was taken from him was subsequently shared online, sparking a resurgence in public support for the Black Lives Matter movement. What the video reveals is something that is maddening and heartbreaking, but unsurprising to Black communities the world over: what Tina Campt terms the ‘statistical probability of Black death’. The viral quality of the video documenting George Floyd’s murder exposes that Black people are not afforded sanctity in life nor in death. For many, the denial and avoidance of the positioning of Black people throughout the world was brought to a head. Here, along with the racially motivated killings of Breonna Taylor, Ahmaud Arbery, Tony McDade, Dominique “Rem’mie” Fells, Riah Milton and countless others during 2020 and beyond, provided stark and undeniable evidence of the devaluing and disposability of Black life. Yet, this is a lived reality which cannot be denied, buried or avoided for Black communities.

Boora is a British Indian photographer who’s work documents the community around her focusing on how people have come together to offer support and care for each other. Her motivation was to extend the feeling of good will and togetherness she experienced.

In his allegory of the cave, Plato describes a group of prisoners living their entire lives chained in the darkness. Shadowy outlines play on rocky walls, providing the prisoners with their only sense of reality, and they remain entirely unaware of the world outside which created these flickering forms. For Plato, a philosopher was someone who broke their chains and departed from the cave forever. Whenever photography has been a witness to a prolonged and major news event, it has tended to generate a set of visual motifs specific to that story. The global ‘war on terror’ for example gave us the ever-repeating tropes of the aftermaths of terrorist attacks, soldiers enshrouded in clouds of sand and dust, hooded figures kneeling in orange, flag draped coffins, and so on. The creation of these tropes was evidently the result of many factors, choices and filters,[1] but two were particularly important amongst them. One was the specific visual aspects of that conflict, for example it’s locales, belligerents and tactics, and the other one was the particular possibilities for photography in the context of the event, possibilities partly dictated by specific practices like the military system of journalistic embedding and the intentional targeting of journalists by insurgent groups. The images that define the ‘war on terror’ were, in other words, as much a representation of what was photographically possible, as they were the a matter of the best way of visually representing, much less explaining, the subject that was being recorded.

In Goldblatt’s series Fugue, intimacy and distance are key. The works meander, moving back and forth through the signs of routine, love and care that bear witness to family life. Chronological time, normally linear and clear, is suspended merging with emotional duration

Chishty looks at mainstream representations of people of colour during Covid, exploring the visual culture and tropes and the racialised press and media coverage, drawing comparisons with the propaganda of the British Empire and World War II.

Covid 19; A Year Lived During 2020 GRAIN Projects awarded a series of commissions and bursaries as part of their national programme. 22 new bodies of work were made as a result responding to Covid 19. Photographers, artists and writers created series, text and imagery that explored and documented the unprecedented times. Work by eight artists from this programme feature in this exhibition. They show us the impact on the individual, family and communities, on our health and wellbeing, the inequalities of the pandemic, new ways of working and new closer connections with nature and each other. Their work focuses on the private, the overlooked and the unfamiliar tropes and imagery of Covid. This is a significant record of life during Covid and the major changes to our way of living and working. Reflecting on and responding to these times as the familiar became unfamiliar the work is an important document of a year lived as never before. Exhibiting Artists and Writers Andrea G Artz Anna Souter Anneka French Barnaby Kent Chris Hoare Chris Neophytou Jamila Prowse Jaskirt Boora Jemima Yong Lewis Bush Lydia Goldblatt Shaista Chishty To view all the work and new writing visit www.grainphotographyhub.co.uk GRAIN Projects, supported by Arts Council England, the National Lottery Players, Birmingham City University and Birmingham City Council